To Know More About Us, Come Here: 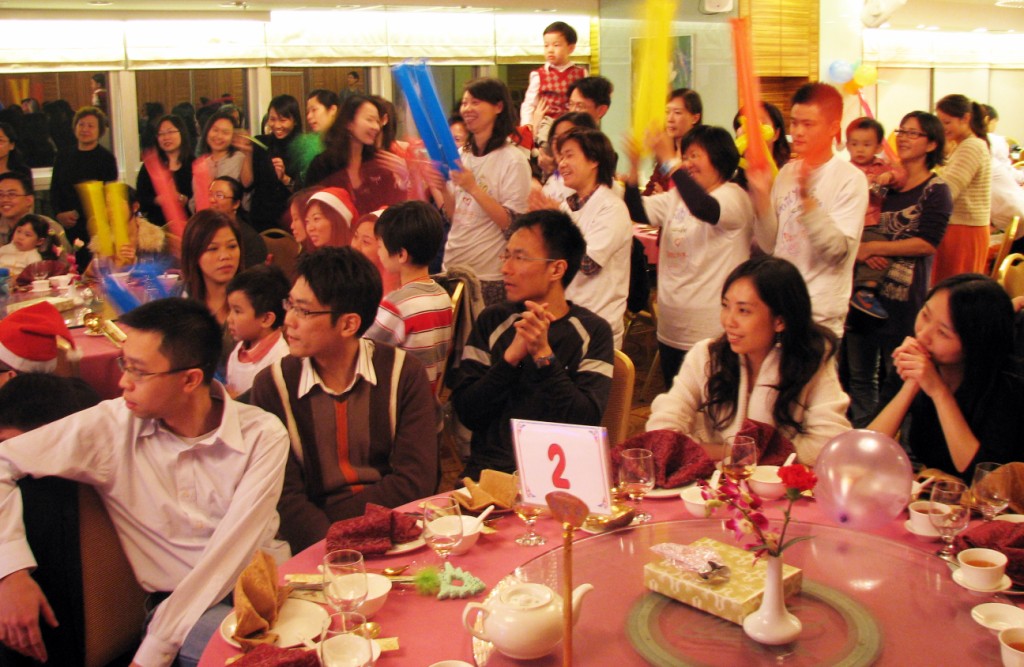 Time for joy to celebrate the season! A moment of revelry as reward! The X’mas party of PYNEH ICU was held in 太古坊彩雲軒海鮮酒家 at Taikoo Place in the evening of 19 December 2008. There were more than 8 tables hosting 109 guests. Rounds of staff of different work shifts thronged to attend in turn.

The event touched off by the Tahia's Dance, and continued with a round of Egyptian dance by our nurse dancer Ms Emily Chun, whose sexy body undulations to the loud Arabic and pop music rhythms accompanied by the electric guitar played by Billy, were cheered by deafening screaming and yelling of ICU staff and our lovely kids. Billy is a nurse in the F4 Oncology Ward, and he had rotated to work in our ICU a year ago.

With continual choreographic and kinaesthetic tutorship under master dancers and open performance for years, Emily staged a repertoire of dancing skills, in one episode with several candlelights delicately balanced atop her head – the Candle Dance. The series of dance entertained us throughout the night, including the Suheir's Tabla accompanied by drum solo, followed by the music "I feel like dancing", and then the Cane Dance with the music Raksset El Assayia.

Two nurses and two doctors competed in squeezing oranges with bare hands to get out as much juice as possible in a minute. ICU Nurse Ben was able to fill up three quarters of a glass with juice and narrowly trumped his competitors. They celebrated by drinking all the juice up!

As juicy as possible - the orange-squeezing competition

There were almost prizes for all from the Lucky Draw, thanks to the sponsorship by both doctors and nurses. While Billy and Dr Joe Lee (our rotating MO from the Department of Medicine) played the guitar, Dr Arthur CW Lau sang along a funny version of 天各一方 (Zone 1 version), depicting a “love story” between a nurse and a doctor in the Zone 1 isolation room, who could not communicate with each other easily while wearing masks. Arthur’s drollery certainly brought up a lot of laughters, but believe it or not, the song left the audience wondering who the Romeo and Juliet were of this merely made-up story!

A group of nurses from the Guangdong Province joining the nursing training programme with our ICU danced and sang 天路 (Skyroad), a song commemorating the opening of the Qinghai–Tibet railway Railway (青藏鐵路). This railway was inaugurated on 1 July 2006. More than 960 km, or over 80% of the Golmud-Lhasa section, is at an altitude of more than 4,000 m, and thus it becomes the highest railroad in the world. There are 675 bridges, totalling 159.88 km, and about 550 km of the railway is laid on permafrost. Our Guangdong nurse 秋香 sang like a diva in the near-soprano range, while a young nurse enthralled us by backbending on the stage, followed by making a crisp sit-up with the dexterity like a professional dancer. Were they not nurses, they could have been real showbiz babies!

ICU nurse Joan, quiet and serious we once thought, surprised us by singing a lip-synched version of Mama Mia, in which she gave a burlesque act of fumbling for some forgotten lyrics written on a piece of paper, but for a lip-synched song! After another round of lucky draw, she talked in Korean to introduce and then sang a Korean song Baby Baby. As the audience was cheering and waving in sync with rhythms, the whole place was flooded with flying balloons and confetti, inundated with joy and thundering applause.

Joe Lee, Billy, Ben and Arthur offered impromptu accompaniment by guitars and vocals, while 秋香 sang another song 黄土高坡 (Yellow Soil on Highlands). Our supporting staff Ailin soothed our ears with her sweet voice singing several melodious tunes, 月亮代表我的心 being one of them. A waiter asked, "Are you guys from the music industry?"

When our mood escalated to climax and the music flowed, time was unwittingly half an hour to midnight. When we bid goodbye to friends and colleagues, wished each other a Merry Christmas and a Happy New Year, we are very certain that there is going to be a happier celebration for an even bigger harvest in the coming year of 2009. 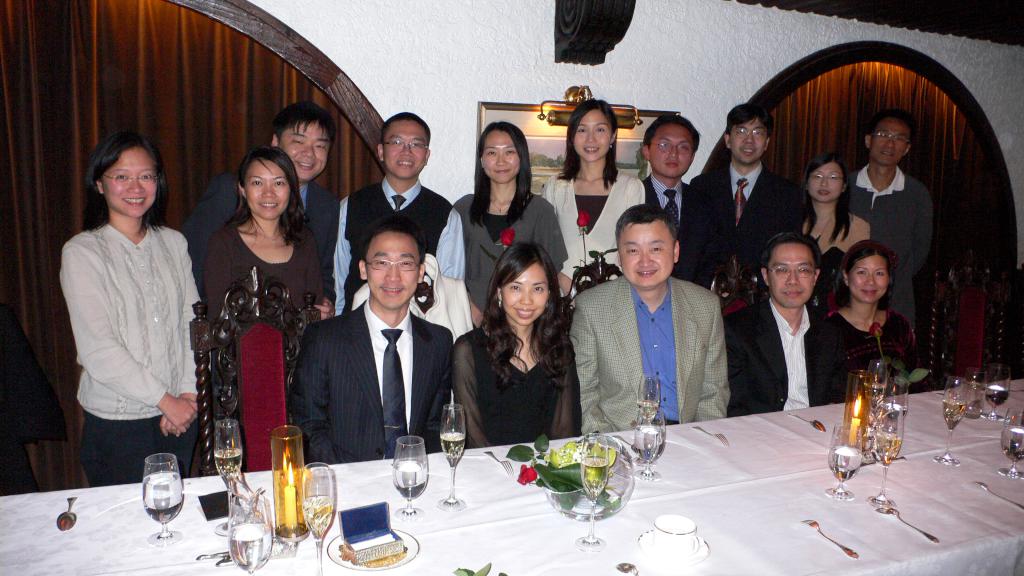 Our department had a wonderful dinner at the Amigo Restaurant celebrating the passing of the CCM Exit Examinations of our trainees. Our unit has produced a total of 6 new CCM fellows since November 2007. They are: 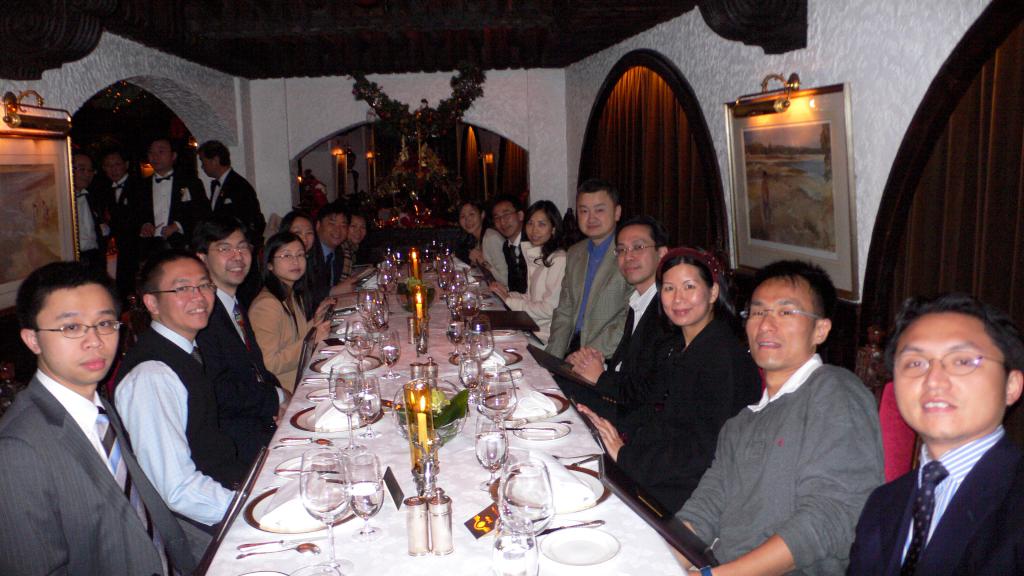 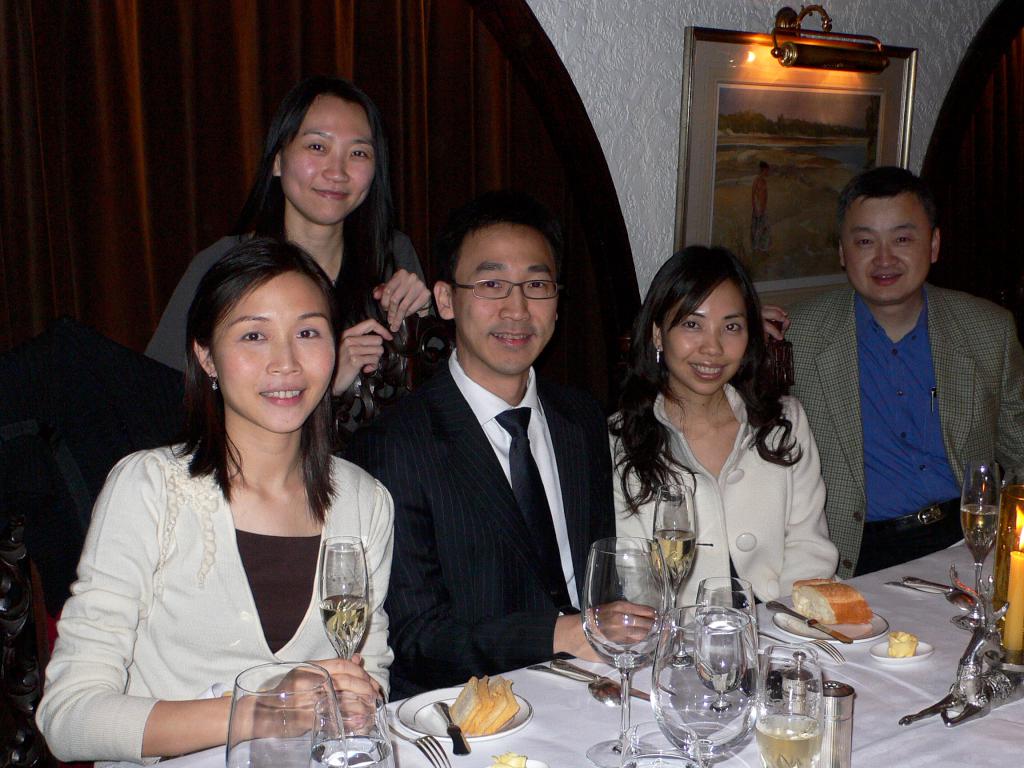 Really want the new fellows to know again that we all are so proud of them. Wish them every success in their coming career. We trainers will also continue to work hard; there are three more new CCM trainees coming in the year 2009!

Dr CHAN Yan Fat Alfred was promoted Associate Consultant to the Intensive Care Unit of Caritas Medical Centre. Dr LAU Chun Wing Arthur wrote a Chinese poem to congratulate him on his promotion. The poem contains his name "CHAN", "YAN" and "FAT" in it. The poem reads, "A fierce tiger is setting out for a great journey, carrying three accreditations (AIM, Resp and CCM) and therefore making famous our name. He always exhibits an altruistic approach to his patients, so I must take out my good old wine to celebrate his promotion." "割股" means that in the old times in China, some very nice doctors would cut out a part of his own thigh flesh in order that their patients could be treated by eating the flesh as nutrients. Sounds incredible today, it is an ultimate exhibition of altruism and self-sacrifice in this profession.

The whole unit also had a farewell dinner with Dr Chan. A Chinese sword was presented to him as a souvenir, implying that he would use it to fight his way forward, and win!

Opening of Our Newly Renovated ICU at D10 Ward

Our Department of Intensive Care was established in February 2006. A newly renovated ICU in the D10 ward was opened and we had a group photo to commemorate this major event.

Dr Anne Leung left our department for promotion to Queen Elizabeth Hospital as Consultant. We held a farewell part in a private kitchen restarant at South China Building in Central. 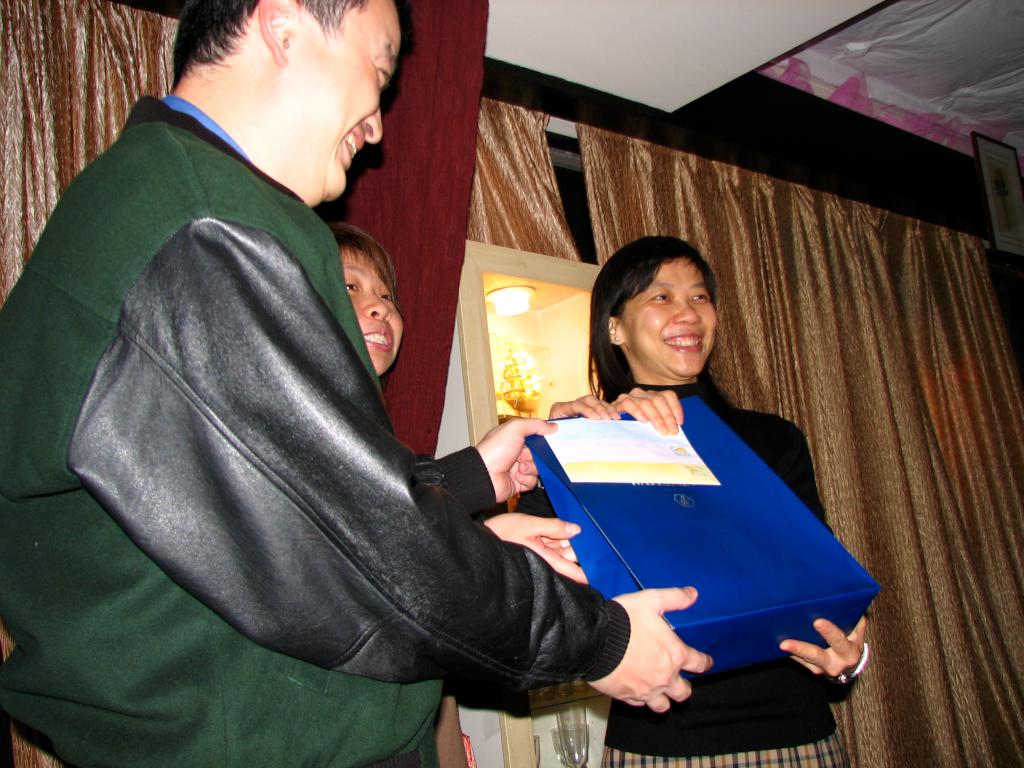