2009 Alveolopleural or Bronchopleural Fistula - From the Critical Care Physicians' Perspective

Also appears in the Newsletter of The Hong Kong Thoracic Society, The American College of Chest Physicians (Hong Kong and Macau Chapter) and The Hong Kong Lung Foundation, vol 19, no 1, Mar/Apr 2009.

You may also view the powerpoint presentation file on this topic here. 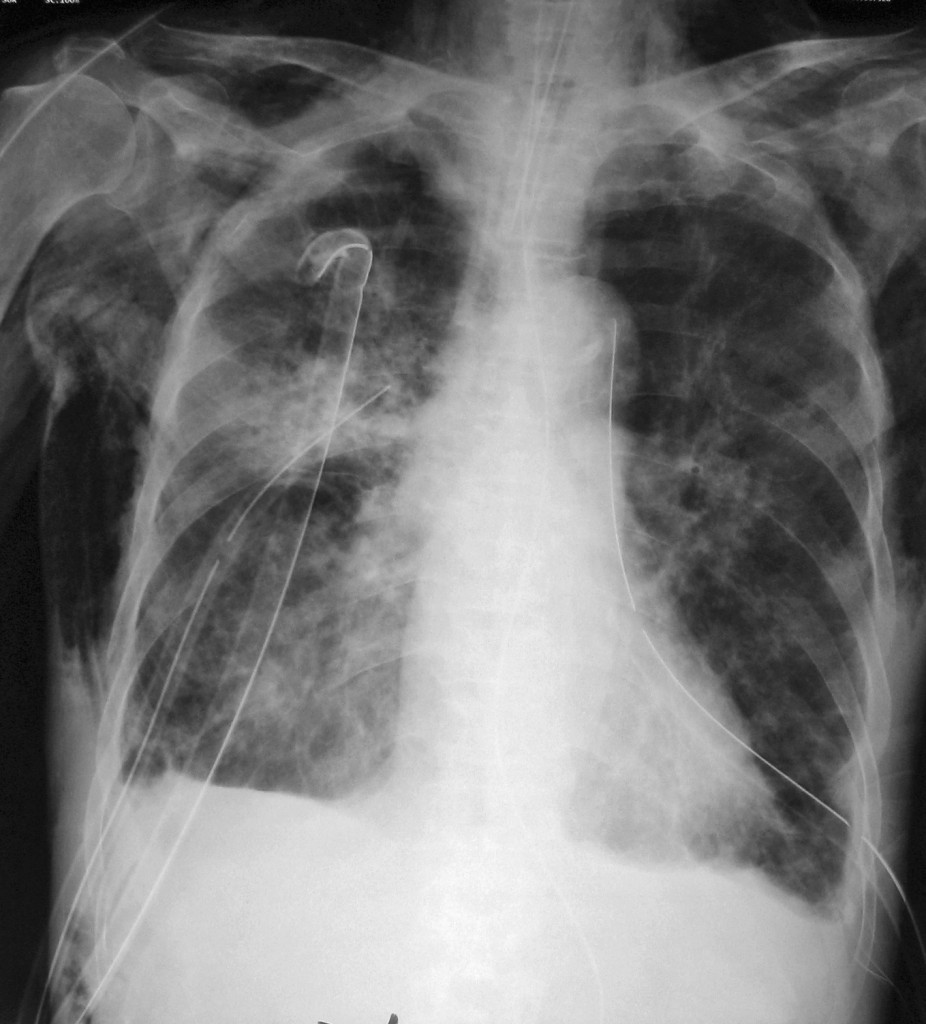 Figure. CXR of the patient

In the following article, we illustrate the differences between alveolopleural fistula (APF) and bronchopleural fistula (BPF) with a review on their management through the presentation of a case recently encountered in the intensive care unit (ICU).

A 70-year-old ex-smoker with chronic obstructive pulmonary disease who was capable of caring for himself was admitted in September 2008 for his first episode of left-sided spontaneous pneumothorax. A chest drain was inserted, but the leak still had not healed by three weeks. He therefore underwent a video-assisted thoracoscopy (VAT). Intraoperatively, in an attempt to free the left lung from adhesions, the lung surface was torn and talc poudrage was thus abandoned. VAT was repeated one week later, but had to be converted to an open thoracotomy to identify the site of air leak, which was found at the apex of his left upper lobe. It was repaired and two new chest drains were inserted. Despite surgical repair, air leak persisted postoperatively. Two months into this admission, the patient developed right-sided spontaneous pneumothorax in addition to the persistent air leak on the left. Multiple chest drains were inserted into the right pleural cavity through which suction was applied. He developed respiratory failure two weeks later and was admitted to the ICU. Chest X-ray showed air-space consolidation in both lower lobes. The lungs were fully expanded, but air leak persisted bilaterally.

Our patient suffered from bilateral APF (synonym: parenchymal-pleural fistulae), defined as persistent air leak for more than 24 hours after the development of an abnormal communication between the pulmonary parenchyma distal to a segmental bronchus and the pleural space.1,2 This is best distinguished from a BPF, which is a communication between the lobar or segmental bronchi and the pleural space, since aetiology and management are different (Table 1). In a retrospective study, follow-up of 73 patients with a chest drain inserted for secondary spontaneous pneumothorax found that air leak resolved spontaneously in 61% by day seven and 79% by day 14, but the rate of cessation of air leak became much slower after that. Six out of seven patients who developed pneumonia and/or infection at

the chest drain site had their chest drains left in-situ for more than 15 days.3  Repair of an APF is therefore necessary when air leak persists for more than seven to fourteen days to avoid infective complications and complications associated with prolonged immobilization, and in the uncommon event that a peripheral fistula contributes significantly to ventilatory failure.

Bilateral pneumonia was the cause of our patient's deterioration. Ventilatory support was deemed necessary and he was intubated using direct laryngoscopy under rapid sequence induction. This method of intubation however, is contraindicated in patients with BPF (Table 1).

Ventilating a patient with significant air leak can be challenging. The goal of mechanical ventilation is to maintain adequate alveolar ventilation and oxygenation while minimizing fistula flow to encourage closure and healing of the fistula. This is achieved through minimizing peak airway pressure and transpulmonary pressure (alveolar pressure minus intra-pleural pressure) in BPF and APF respectively. The lowest effective tidal volume, the minimum positive end-expiratory pressure (PEEP), and the least number of positive-pressure breaths should be delivered.4 Any negative suction through chest drains should also be discontinued as early as possible. These maneuvers however, may result in a rise in the arterial partial pressure of carbon dioxide and a drop in the oxygen saturation, warranting the use of permissive hypercapnea plus a higher fractional concentration of inspired oxygen. With these adaptations, conventional ventilation usually suffices.5

Auto-triggering may be encountered when ventilating a patient with significant air leak. In pressure-triggering systems, inspiration is initiated when the airway pressure falls by the set sensitivity below the set PEEP. Inability to maintain PEEP in the presence of significant air leak results in auto-triggering. In flow-by-trigger mode, auto-triggering occurs when the rate of leak is large enough to cause a drop in the base flow rate that exceeds the set sensitivity. The end result is hyperventilation with consequences of respiratory alkalosis, as well as inappropriate escalation of sedatives and neuromuscular blockers known to prolong the duration of mechanical ventilation and length of stay in the ICU.6

In case of failure of conventional ventilation, the list of options includes:

Chest drain manipulation refers to intermittent inspiratory chest tube occlusion (IICTO) and chest tube pressurization (CTP). IICTO (see figure) synchronizes chest tube occlusion at inhalation, thereby limiting loss of tidal volume with redistribution to the rest of the lung. Technically, the underwater seal is connected to the inspiratory limb of the ventilatory circuit through a pressure-amplifying valve. The positive pressure generated at inhalation closes the outlet of the underwater seal and thereby the chest tue.7 Pulmonary gaseous exchange is restored and healing of the fistula is promoted. CTP on the other hand, applies positive pressure equivalent to PEEP to the intrapleural space by connecting the underwater seal to the expiratory limb of the ventilatory circuit. This limits air leak at expiration and maintains intrapulmonary PEEP that is necessary to prevent hypoxemia in some patients.8

Unilateral air leak is an established indication for lung separation, which can be achieved using either an endobronchial blocker or a double-lumen endotracheal tube (ETT). An endobronchial blocker is introduced alongside or into the lumen of a single-lumen ETT and then guided bronchoscopically to its target site. However, ILV is not possible and atelectasis of the blocked side may result in intolerable hypoxemia. A double-lumen ETT on the other hand, allows ILV and the affected side can be maintained on PEEP, or ventilated using conventional mode with pressure limitation or HFV. Disadvantages include additional skills required at placement, tube displacement, bronchial ischemia, stenosis and rupture from the high pressure generated by the endobronchial cuff, and limited access for suctioning and bronchoscopy.

HFV is superior to conventional ventilation in patients with proximal BPF and otherwise normal lung parenchyma. However, its efficacy in patients with APF and abnormal lung parenchyma is controversial.9,10 Gas flows preferentially through a fistula because it has low airway impedance and infinite compliance. HFV redirects flow away from a fistula because airway impedance is increased with increased respiratory rate. However, this increase in airway impedance becomes less important in patients with reduced compliance in the rest of the lung. Secondly, reduced peak airway pressure in HFV is less of a concern in a peripheral APF because pressure changes are blunted by intervening resistances.

disease resolves and the APF heals. In the uncommon occurrence where a peripheral APF contributes significantly to ventilatory insufficiency, closure of the fistula is warranted. Many a times these patients are too ill to risk surgical repair, and non-surgical methods need to be considered. This includes chemical pleurodesis through a chest tube when the lung is fully re-expanded. However, clamping the chest tube after instillation is contraindicated in the presence of air leak. One way around this is to elevate the connecting tube between the chest tube and the underwater seal to 60cm above the level of the chest to allow air to escape. Alternatively, the leak can be closed endoscopically by injecting various sealants. This method is most suitable for small peripheral leaks around 1mm in diameter. 4 More recently, reports have been published on the successful use of endoscopic devices including the endobronchial Watanabe spigot (Novatech; France), 11 endobronchial valves primarily designed for endoscopic lung volume reduction in emphysema,12 and the Amplatzer device (AGA Medical; US) originally used for closure of atrial septal defects.13

As none of the methods described so far have been subjected to large randomized controlled trials, the decision to use any one of these methods is based on its availability and clinician's preference.

Our patient tolerated conventional ventilation with pressure support mode. His general condition on ICU admission was already poor and the risk of surgical repair was high. Non-surgical means of APF closure is thought to be inappropriate because of on-going pneumonia and infected pleural space with purulent respiratory secretions. He eventually died with his APF three months after admission.

Table 1. Comparison of BPF and APF.