Submitted by Dr LAU Chun Wing Arthur on 4 May 2009 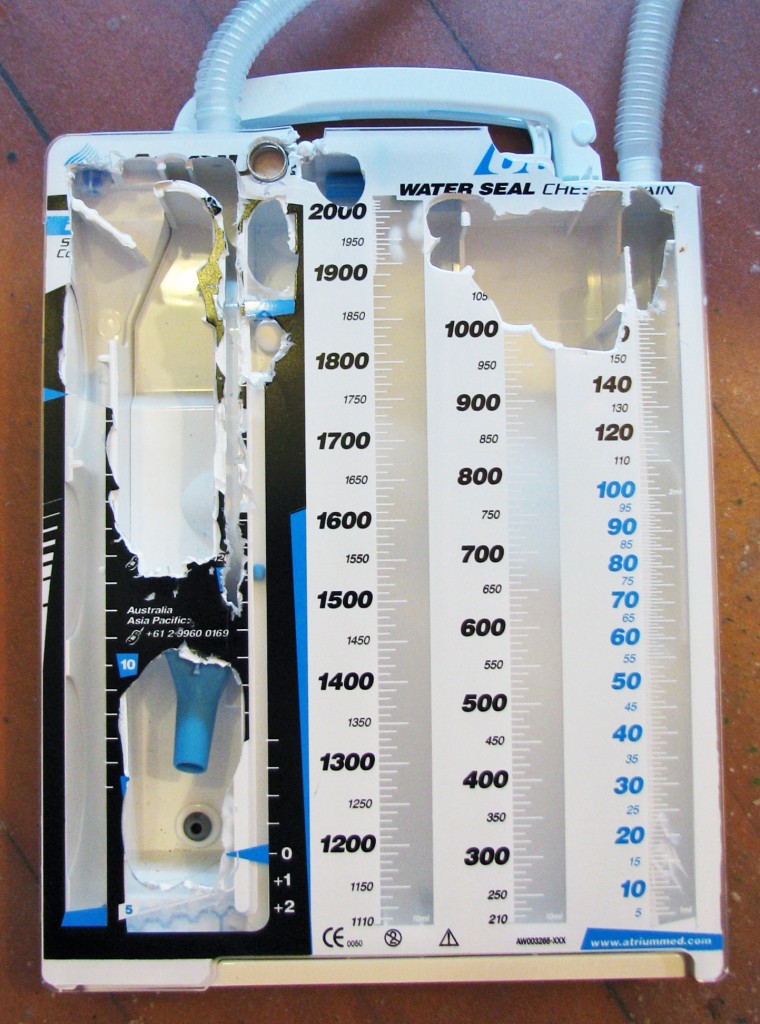 Have you ever taken apart this commercial chest drainage system (Atrium Ocean TM) to learn about the inside mechanisms?

This is actually a 3-bottle chest drainage system, but has the added advantage that it is sterile and compact, having overpressure and underpressure protection, and it will not lose its fluid even when tipped.

Before understanding what it is about, one needs to know the mechanism of a 3-bottle chest drainage system. 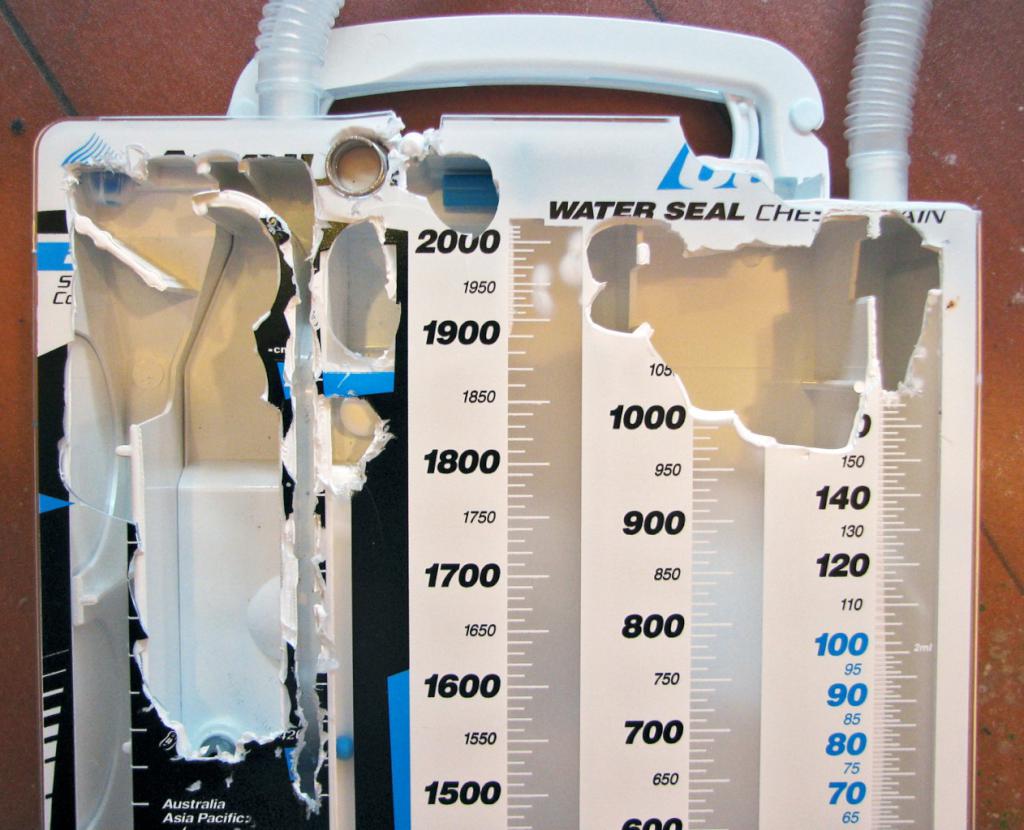 Figure. A closer look of the various chambers.

Figure. This is the Chamber D (Bottle 1), the collection bottle. Pleural collection first enters the rightmost column, and then overflows to the second and third column until a maximum of 2100 ml. The volume scale is set such that the first 200ml is given at higher resolution than the subsequent volumes in order for a quick assessment of the rate of bleeding. The blue structure is a tube connector between Chamber D (Bottle 1) and Chamber B (Bottle 2), similar as the tubing between Bottle 1 and Bottle 2. The position of this blue connector is such that it is elevated above the back plate, so that even when the vessel is tipped back, fluid communication between the two chambers can be prevented.

Figure. Chamber B (Bottle 2) and Chamber C (Air Leak Monitor) at the bottom consist of partitions to make it just like a 2 cm water seal when water is added to the 0 cm mark. The string shows the route of how the water can be added into this chamber through an outside tubing.

Bubbling and swinging can be observed in Chamber C with the help of a blue float ball on top of the water. Water is also tinted blue when added to this chamber.

Suction can be applied through the same tubing above Chamber B (Bottle 2), the same pressure as in Chamber D (Bottle 3).

Figure. Manual High Negativity Vent. This vent is concealed from the front. It consists of a stiff elastometric disc with a coil for compressing the disc again the button at the back to close the aperture from Chamber B (Bottle 2) to the atmosphere. When the button is pressed from the back, the pressure inside the chamber is equalized to the atmospheric pressure. The water level in the small arm of the water seal rises as intrapleural pressure becomes more negative. Some situations can cause high negative pressure, e.g., when the patient is in respiratory distress, coughing vigorously, crying; chest tube stripping (vigorous milking or stripping can create dangerously high negative pressures as high as –450 cm H2O) ; decreasing or disconnecting suction. Depress this filtered manual vent to manually vent the system of high negative pressure until bubbling occurs in the air leak monitor. Do not depress the vent when the patient is on gravity drainage or when suction is not operating, otherwise the pleural cavity pressure will gradually be equalized to atmospheric pressure (0 cm H2O) and a pneumothorax may develop. The hook points to the hole which connects Chamber B (Bottle 2) to the outside atmosphere.

Figure. High negativity float valve (white) - This valve is housed inside a small cavity, with its controlled release action, enables a patient to draw as much
intrathoracic pressure as is required during each respiratory cycle. During prolonged episodes of extreme negative pressure, this valve will prevent inter-chamber siphoning and hence the sterility of the fluid collected from a patient, and also automatically relieve excess vacuum to a lower, more desirable pressure level after a certain period of time. The mechanism for automatic release is that the ball has a density of less than 1, and so is buoyantly urged into the aperture to close it. However, water can still pass through it at a substantially reduced rate through a small notch of the aperture. When enough water is passed through the aperture above the ball, the valve will release. 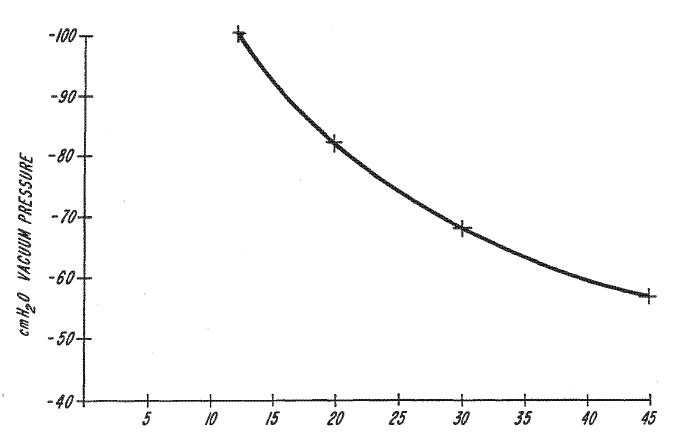 Figure. The graph shows that the higher the negative pressure inside Chamber B (Bottle 2) and Chamber D (Bottle 1), the shorter will be the release time of the float valve. For example, a normally breathing patient can generate a vacuum of -90 to 100 cm H2O, therefore, this system can allow the patient to maintain such vacuum level for a period of at most 12 seconds. (Source: United States Patent, no. 5,401,262)

Figure. The entry to Chamber A (Bottle 3), the suction control chamber. This chamber consists of a narrow posterior column (hidden from view from the front) and a wider anterior column (visible). Water is added to the desired level of intended maximum suction level through this outlet with a grey vent plug with 2 holes. This mechanism regulates vacuum by allowing air at atmospheric pressure to be drawn through the water column. Suction source should be turned on until constant, gentle bubbling occurs in this chamber. If a suction of more than -20 cmH2O is desired, tape over the two holes of the grey vent plug with non-porous tape and read vacuum pressure directly from the regulator or pump.

There is another smaller opening at the top left corner. This is the Positive Pressure Relief Valve (PPRV). In this valve, a small blue plastic ball seats against the aperture below it. It rises in response to excessive positive pressure inside Chamber A (Bottle 3), e.g. in coughing or an sudden increase in air leak into the pleural cavity). Such pressure must be relieved, otherwise water may be forced out through the grey suction control vent plug instead. The posterior column of this Chamber A (Bottle 3) has a smaller diameter than the anterior column so that the water that can be blown from the larger anterior column to the smaller posterior column is limited, and it also limits the water going from the smaller posterior column to the larger anterior column when suction starts. The PPRV is situated anteriorly and water cannot easily go through it when the system is tipped over. 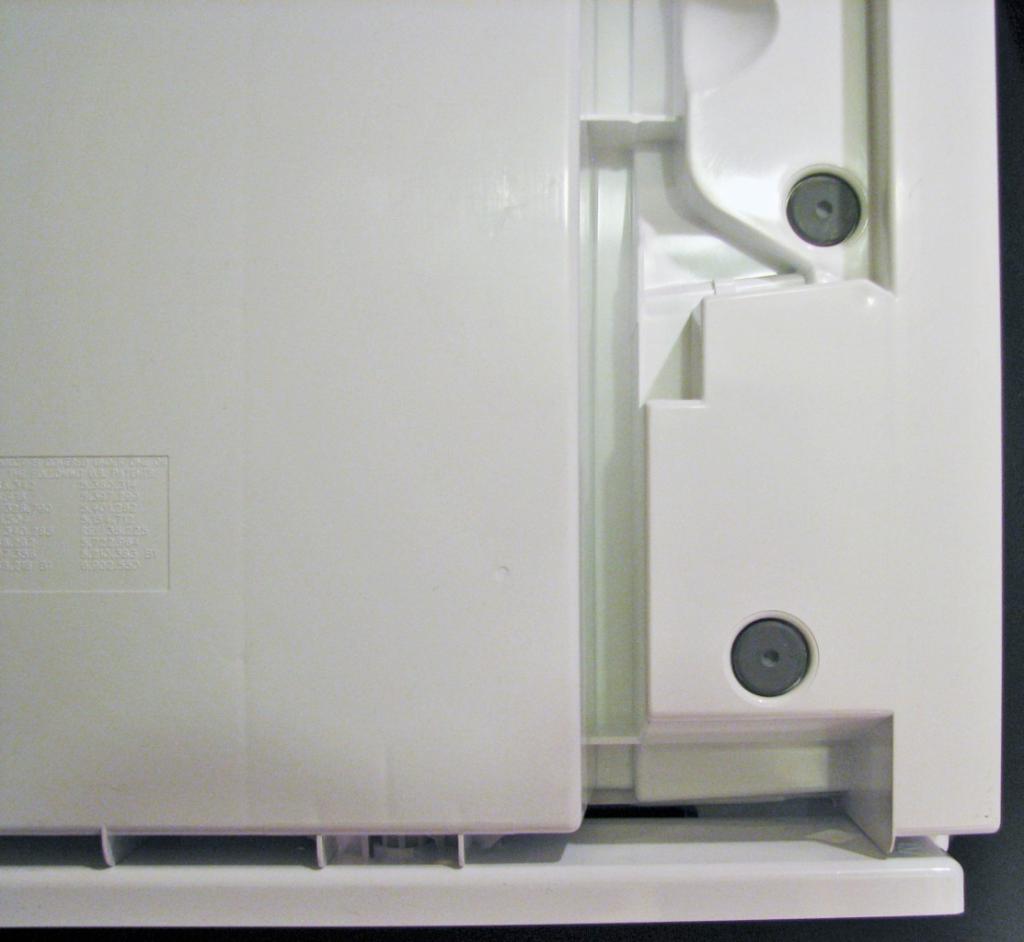